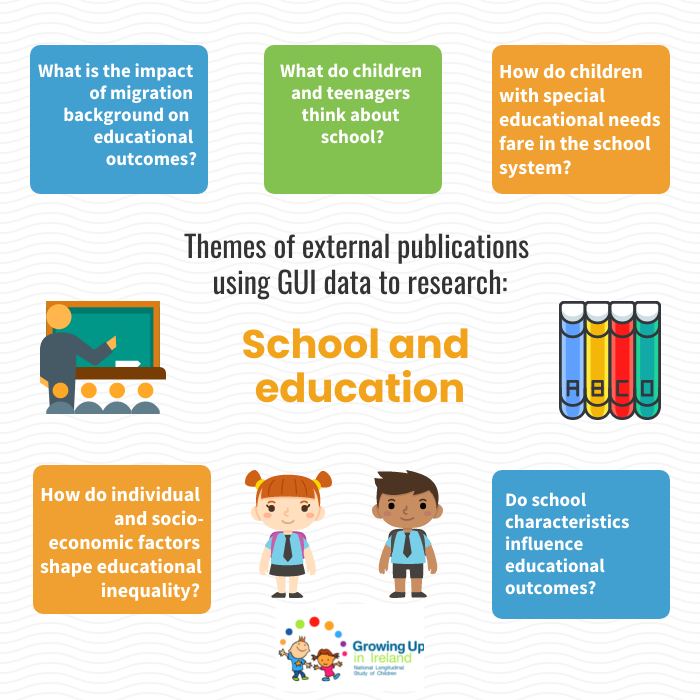 Over the years of Growing Up in Ireland, the data have been used by researchers to examine a range of issues and concerns in the lives of children and young people, and their parents. In a new series of posts, we highlight studies published in peer-reviewed journals that address particular themes. The third in our series looks at School and Education.

A capability approach to understanding academic and socio-emotional outcomes of students with special educational needs in Ireland. Mihut, G., McCoy, S. & Maitre, B.

Are the effects of intelligence on student achievement and well-being largely functions of family income and social class? Evidence from a longitudinal study of Irish adolescents. O’Connell, M. & Marks, G.N.

Children’s mathematical lives and the influence of gender: The importance of cultivating positive attitudes towards mathematics. Leavy, A. & Murphy, B.

Shaping educational expectations: the perspectives of 13-year-olds and their parents. Smyth, E.

Social relationships and the transition to secondary education. Smyth, E.

The role of parental expectations in understanding social and academic well-being among children with disabilities in Ireland. McCoy, S., Maître, B., Watson, D. & Banks, J.

An mhaith leat an Ghaeilge? An analysis of variation in primary pupil attitudes to Irish in the growing up in Ireland study. Devitt, A., Condon, J., Dalton, G., O’Connell, J. & Ni Dhuinn, M.

Multigrade teaching and age composition of the class: The influence on academic and social outcomes among students. Quail, A. & Smyth, E.

The role of parental expectations in understanding social and academic well-being among children with disabilities in Ireland. McCoy, S., Maitre, B., Watson, D. & Banks, J.

The relationship of parenting style to academic achievement in middle childhood. Murray, A.

What do we know about special educational needs? Evidence from Growing Up in Ireland. Banks, J. & McCoy, S.

The transition to primary education: Insights from the Growing Up in Ireland Study. Smyth, E.

Wellbeing and school experiences among 9- and 13-Year-Olds: Insights from the Growing Up in Ireland study. Smyth, E.

Social relationships and the transition to secondary school. Smyth, E.

Attitudes to Irish as a school subject among 13-year-olds. Smyth, E. & Darmody, M.

A Study on the prevalence of special educational needs. Banks J. & McCoy S.

We use cookies on this site to ensure it is functional and for anonymous analytics information on how visitors are using the site.

By pressing accept you are consenting to analytics cookies. To switch them off or find out more see settings.

This website uses cookies so that we can provide you with the best user experience possible. Cookie information is stored in your browser and performs functions such as recognising you when you return to our website and helping our team to understand which sections of the website you find most interesting and useful.

Strictly Necessary Cookie should be enabled at all times so that we can save your preferences for cookie settings.

If you disable this cookie, we will not be able to save your preferences. This means that every time you visit this website you will need to enable or disable cookies again.

This website uses Google Analytics to collect anonymous information such as the number of visitors to the site, and the most popular pages.

Please enable Strictly Necessary Cookies first so that we can save your preferences!